May 2017 – Planning permission has now conditionally been granted, Praise God.

To read any of the planning details and the reasons for delay please look at Sheffield Councils planning website.

To date we have now raised over £400,000 towards our £1.1million building project. This means that we have been able to purchase our new site without a mortgage, complete the refurbishment of the former library and move the Church Offices & Burngreave Foodbank into the former library building.
As a result we are still waiting for planning permission for the major alterations and extensions to form the new Rock Christian Centre facility. The plans include joining the former library building with the former housing benefit offices to provide a central concourse with serving area and community café area, mezzanine floor with access to gallery. The roof of the former housing benefit offices will be removed and a new steel structure will be erected to provide a new 500+ seat auditorium with additional community and children’s rooms etc.
The estimate for the construction of this exciting new facility is £700,000 We are currently using voluntary fundraisers in the church to research potential donors and grant making bodies. (see link to concept plans for this exciting new facility for Rock Christian Centre.)

Following the purchase of our new site, RCC was unexpectedly offered the opportunity to take over the small chapel on Handley Street whose congregation were closing. This chapel is only 120 metres from our new site and is surrounded by derelict land and buildings. It is an area frequented by drug users and we are planning to rename the building – The Lighthouse – and open it up as an outreach project to the many drug users and addicts that gather around the chapel. 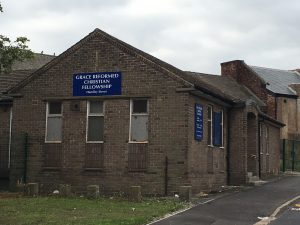 Time for another tidy up outside because we want to make sure it keeps clean and tidy.

We are now in and serving the public through Burngreave Foodbank. Also able to have our first ‘Breakthrough Prayer’ meeting.

Tesco Foodbank collection, we are so grateful for the generosity of people donating to Burngreave Foodbank.

We are really happy to be able to get the signs up on the building.

Work begins on the joining wall with the old Petrol station

On June 18th more than 40 volunteers helped to move over 4 tons of food plus all the Foodbank & Church office equipment into the refurbished library building. The Foodbank will be operating from the new site using a temporary serving area until the new building is constructed which will provide larger and much improved serving, storage, and sorting areas. The church offices have moved into the ground floor of the former library building. The new administrative address of the church is:- Rock Christian Centre, 177-195 Spital Hill, Sheffield S4 7LF. New telephone number 0114 3503232

Architect’s plans were submitted for the extensions and alterations to the new site. These plans will join together the former library building with the former housing benefit offices to provide a central concourse with serving area and community café area, mezzanine floor with access to gallery. The roof of the former housing benefit offices will be removed and a new steel structure will be erected to provide a new 500+ seat auditorium with additional community and children’s rooms etc.

We are now at the stage of painting, so if you are able to help with painting a room please get in touch with us in the office, we will happily give you a brush and some paint.

Someone has damaged the windows at the new Foodbank site, an indication of the area we are moving into and with God’s help able to change.

We are now in the process of raising about £650,000 to be able to convert the old ‘Housing Offices’ into a church auditorium. For more information please feel free to contact us.

Internal renovations are going well to create the Foodbank area so that we are ready to serve clientele from here sometime in June.

– tradesmen from the church gave an enormous amount of their time to refurbish the former library building in preparation for the Church Offices and Burngreave Foodbank to move to the new site. Two new boilers and heating systems were fitted; stud walls built; electrics and fire panels replaced; every room painted at a fraction of the cost had we employed outside labour.

We praise God that we were able to raise all the monies necessary to complete the purchase of our new site without a mortgage! God’s timing is always perfect! The completion of the purchase was delayed until March as the vendors had lost some of the legal paperwork therefore this gave us extra time to raise the full funding for completion. We thank the Lord for every person who gave so generously and for those who supplied interest free loans to make the purchase possible.
On March 19th, the day after completion we had a workparty to blitz the site of overgrowth and rubbish. RCC Volunteers filled a lorry with green waste; many bins with bottles, cans and litter; 6 sharp bins with needles and drug paraphernalia; 4 knives and several car loads of rubbish to the tip!
After our Easter Sunday service the church paraded up to the new site and both buildings were dedicated to the Lord in prayer. The people of RCC were in great rejoicing at God’s amazing goodness and provision to the church.

Rock Christian Centre has an amazing opportunity to buy a half acre site with 2 modern buildings totalling 8,000 sq ft, in the heart of inner-city Burngreave, on the major arterial route to the North East of the City of Sheffield. The move to this new site will take us out of our current rented building in an industrial side street, right into the centre of a deprived multicultural community where we will be a lighthouse for the good news of Jesus.

The new site will not only be home to the church congregation and all it’s activities, but also the Burngreave Foodbank that we run as part of our
charity. (Last year Burngreave Foodbank provided 17,600kg of food to more than 2,900 people, 1,000 of whom were children.) The new site will
also be home for Sheffield Street Pastors and the training base for South Yorkshire Street Pastors. The move to the new site will open up many opportunities for new activities and community projects, that will enable the church to reach out more effectively into the local multi-cultural and predominantly Muslim community.

In the last 12 years the congregation of Rock Christian Centre has grown by more than 600%! We now number more than 250 people from 36 nations. We are currently 43% African; 35% British; 12% Filipino; 10% the rest of the world. Recently we have developed our own Filipino Service in Tagalog. We expect the move to our new site will encourage growth in all areas of the church. The new site is currently owned by Sheffield Council and the buildings were previously Burngreave Library and Housing Benefit Office and associated car park. The buildings cost the council more than £1million to build in 1989. God has been at work in remarkable ways and our offer of £335,000 + 3% costs was accepted for the whole site!

After many months of waiting we were informed that Sheffield City Council had accepted our offer of £335,000 plus 3% fees for the half acre site including the former Burngreave Library, Housing Benefit Offices and associated car parking areas.

After much consultation the Charity Trustees agreed to make an offer to purchase this site and buildings in the heart of the Burngreave Community. A site less than 200 metres from our current rented building on Carlisle Street.

If you are able to support us please feel free to contact us for more information, if you would like to donate to our building project either click here or on the ‘My Donate’ button at the top.